Women are reaching the top of banking and finance in Tunisia. Two pioneering female leaders – a generation apart – talk about their experiences and how Tunisian women are finding their way in financial services.

Amel El Medini began her career in the 1980s and became the first woman Controller of Finances in Tunisia at the country’s Ministry of Finance.

“It wasn’t really considered a job for women,” she says, “You had trips to other parts of the country or abroad, but I wanted to stay at the Ministry of Finance and I had a very good career there.”

El Medini liked the variety the role gave her. No two days were ever the same. “One day we’d be looking at income, another a public company that manufactured milk and butter.” 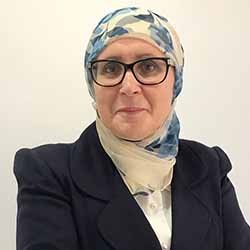 In time, Madam El Medini rose to become the Secretary General of the Ministry of Finance – a position she held for three years until 2012.

She then moved to the state-controlled Banque de l’Habitat (BH), where she was deputy managing director, then managing director, of the Deposits and Consignments Fund. In 2019, she became interim BH’s Chief Executive before her retirement.

But although she’s enjoyed a long and successful career, El Medini hadn’t always wanted to go into banking. As a child she had other ideas. “My ambition was to be a doctor, and I ended up in finance really by chance.”

El Medini’s father suggested she study at the l’École Nationale d’Administration (ENA) – the famous French ‘grande école’ that educates elite officials – when she didn’t get the grades to study medicine.

“I went to look and it seemed interesting enough, so I followed my father’s advice,” she says. At ENA she developed an interest in economics so went on to study at l’Université Sciences Economiques, where she discovered finance.

El Medini grew up in a family with five daughters and two sons. Her father was always very supportive and insisted that his daughters’ education was as important as his sons’. This is not unusual in Tunisia.

Abir Matmti is a Partner and Senior Manager at PWC Tunisia. She says that she too was encouraged from a young age.

“This is usual in the country,” she says, and goes on to describe a long history of female leaders in Tunisia, who provide inspiration and role models, including:

Nowadays, Matmti explains, Tunisian women are succeeding at school and at work – especially in the professions.

“In PWC we have 250 people in the Tunisian office and I would say more than 60% of the people are women. In management you will find more women than men.”

She says that this is increasingly the case across firms in every sector in Tunisia.

Matmti got her first job at PWC in 1999 after finishing university. “To me it was important to work in an international environment. I wanted that connection to the world. Then once I joined PWC, all I wanted was to succeed.”

One of the reasons for that, she says, is that the senior partners and line managers never perceived her as “a person with constraints”. They treated her the same as the men, and that made her redouble her efforts.

In 2015, she became the first female partner in PWC Tunisia, and is keen to point out that the company now has two female partners – the second promoted in 2019.

This is important, she says, because there are “many talented young women” in the firm and they need evidence that their hard work will pay off. They need to see “women become something”.

“I’d like to give hope to those young women.”

We use cookies on our website to give you the most relevant experience by remembering your preferences and repeat visits. By clicking “Accept”, you consent to the use of ALL the cookies.
Cookie settingsACCEPT
Manage consent

This website uses cookies to improve your experience while you navigate through the website. Out of these, the cookies that are categorized as necessary are stored on your browser as they are essential for the working of basic functionalities of the website. We also use third-party cookies that help us analyze and understand how you use this website. These cookies will be stored in your browser only with your consent. You also have the option to opt-out of these cookies. But opting out of some of these cookies may affect your browsing experience.
Necessary Always Enabled

Performance cookies are used to understand and analyze the key performance indexes of the website which helps in delivering a better user experience for the visitors.

Analytical cookies are used to understand how visitors interact with the website. These cookies help provide information on metrics the number of visitors, bounce rate, traffic source, etc.

Advertisement cookies are used to provide visitors with relevant ads and marketing campaigns. These cookies track visitors across websites and collect information to provide customized ads.

Other uncategorized cookies are those that are being analyzed and have not been classified into a category as yet.